My art is a time thing. Merging past, present, and imagining what is to come. Like Billy Pilgrim I am unstuck.
I currently work mostly on paper with ink and acrylic paint. Often as a starting point using paintings by artists such as Goya, Velasquez and Gainsborough, revisiting them with a modern twist/story. A lot of the work I do is on B1 size Fabriano paper 100 x 70 cm.
My background is in performance and video so sometimes I make forays there.
Most of my recent work is portraiture. I use friends and family as models changing them into vomiting mermaids, masked Lords and Ladies, or themselves enacting a story about their lives. In recent projects women are featured looking behind them, and  holding a weapon of choice as they attempt to walk home safely.
I am currently making work for exhibitions in Taipei, Taiwan in May and then later in the year, where due to Covid restrictions all the work will  be prints, and also experimenting with a limited range of merchandising.

Biography:
Born in the West Midlands of England in a small town called Willenhall. I completed an Art Foundation Course at Walsall School of Art, UK , a BA at Cardiff College of Art, Wales, and an MA at London University/Birkbeck in Computer Applications and Art History. Currently I am based in Gran Canaria, Spain. In my art I use different materials – drawing, painting, video and photography. I also reference different times and periods in history merging past, present and imagining what is to come.I have made art under three names:

Anne Wilson: 1982 to 1995, I was a performance/video artist working with Marty St James. We did tours of the US and the Parallel Galleries in Canada, worked across the UK and Europe, and had video work in numerous festivals. In 1990/91, the National Portrait Gallery, London, commissioned three video portraits: the swimmer Duncan Goodhew (photograph above ©npg); Sally Burgess, the opera singer; and Julie Walters, the actress/comedian. Other video portraits were also shown at the Nagoya Video Biennale in Japan and at the German Parliament building, then in Bonn.

Anne Baker: From 1996, I taught art at Camden Institute, London as head of department, and at the University of North London in the architecture faculty. It was at UNL that I became interested in virtual reality. In 2000, I was commissioned by the Montreal Biennale to make 'Container', a virtual reality depository for memories which was hand-coded using VRML. 'Container' was exhibited in Montreal, London and at Kingston Art Gallery, as well as having an interactive presence online. I then took time off from art to bring up my children.

Fatima Fletcher: In 2015 and 2016, I had 2 exhibitions at Islington Arts Factory, London, of photomontage works and video. In 2016, 'Memory is a Beach' video was chosen for the London Short Film Festival.
In 2018 I started painting in acrylics and in January 2019 I moved to Hong Kong where I lived during the worst of covid and through the protests, both of which affected my work. The pollution in the South China sea inspired a set of works featuring Mermaids who were dying, masks appeared in my Portraits and ​​​​​​​Hong Konger's protests against China taking over their legislature led to my Bench intervention piece as there were many broken hearts in Hong Kong. 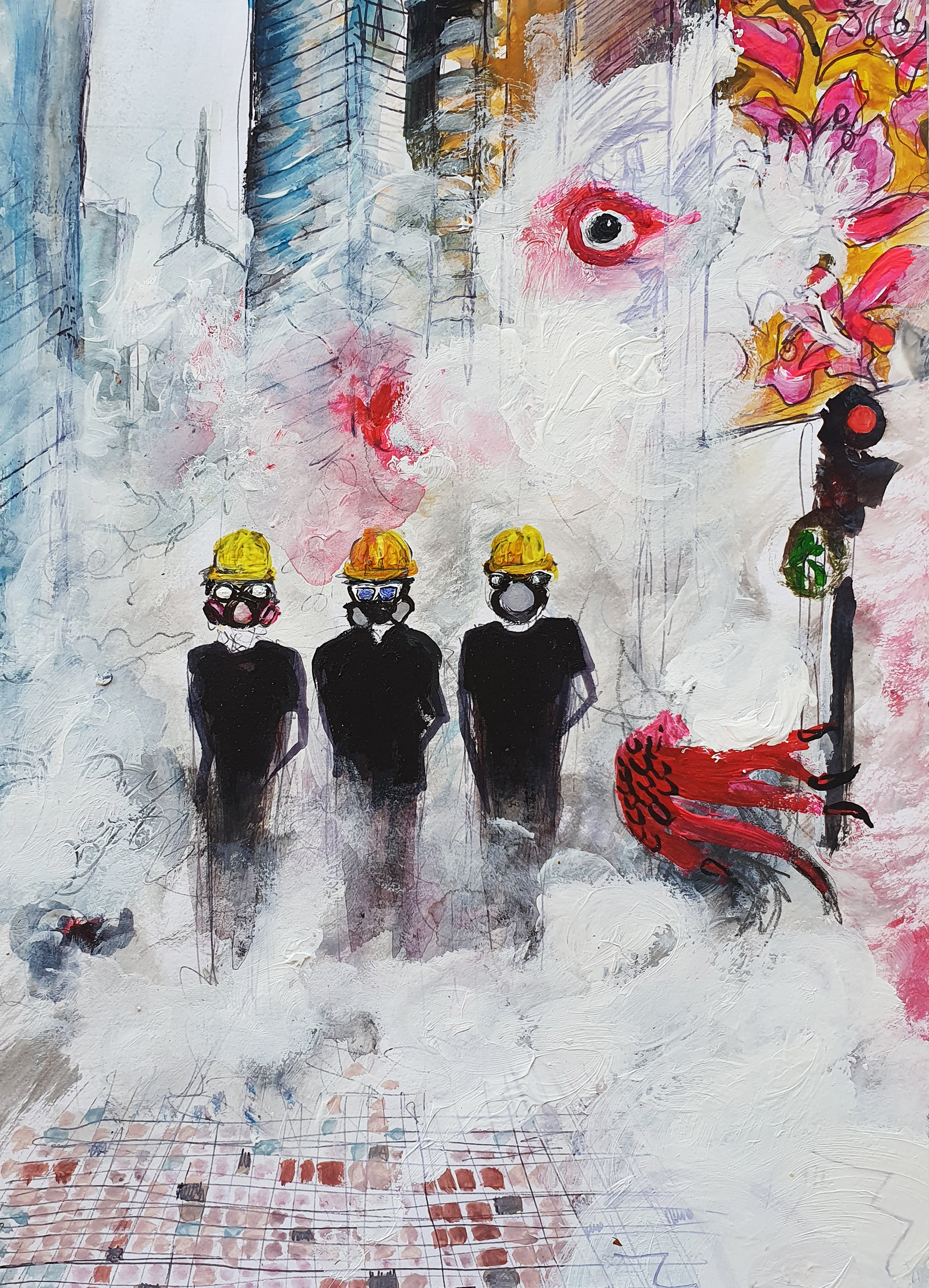 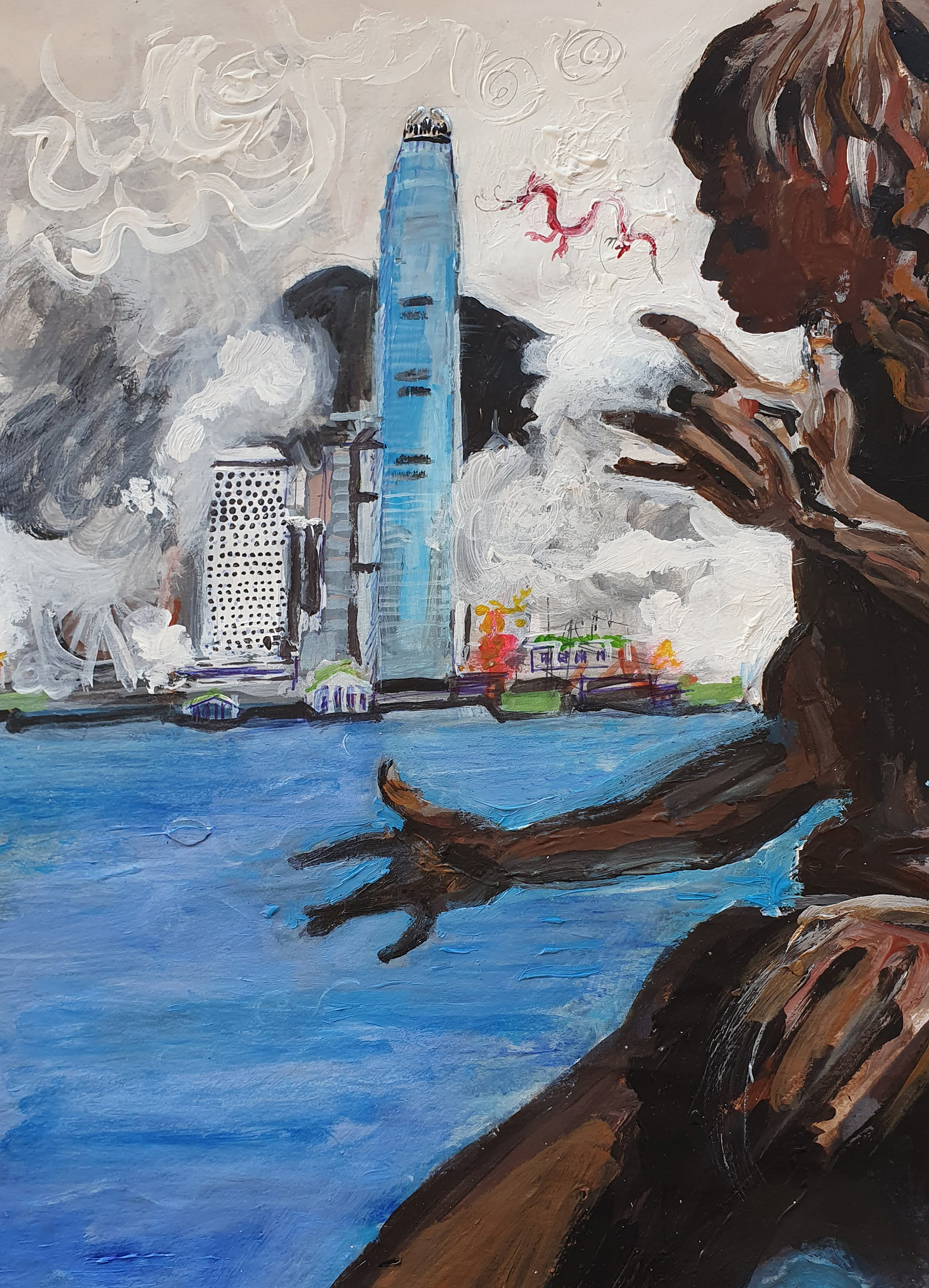 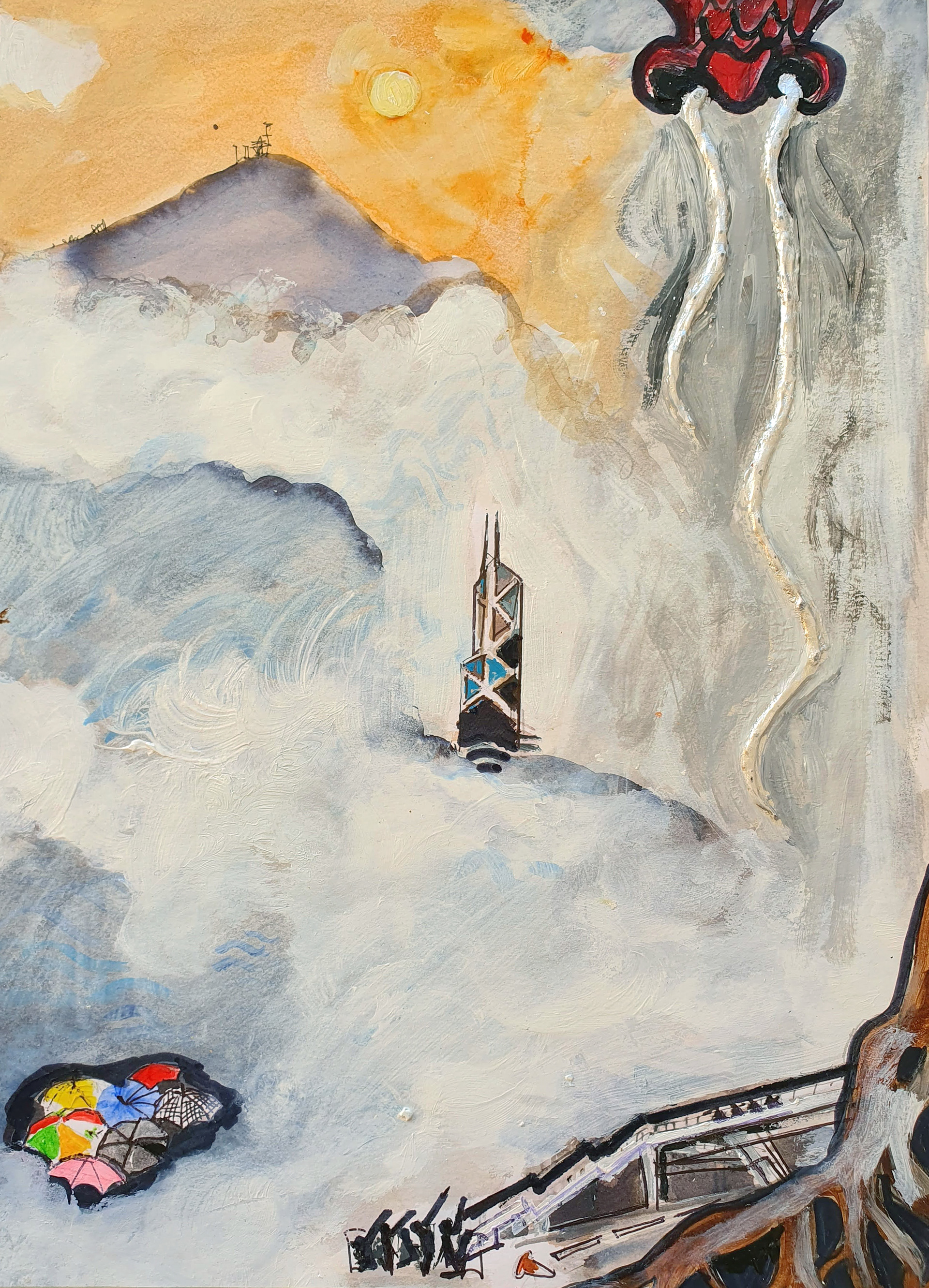 Hong Kong 2019 Set of 3 works in acrylics and gilding paper April 2020
I moved to Gran Canaria in September 2020 and began working on paper with ink as well as using paints and video. During lockdown in 2021 I had 3 works exhibited by Artaviso an Australian based artists project/exhibition group: 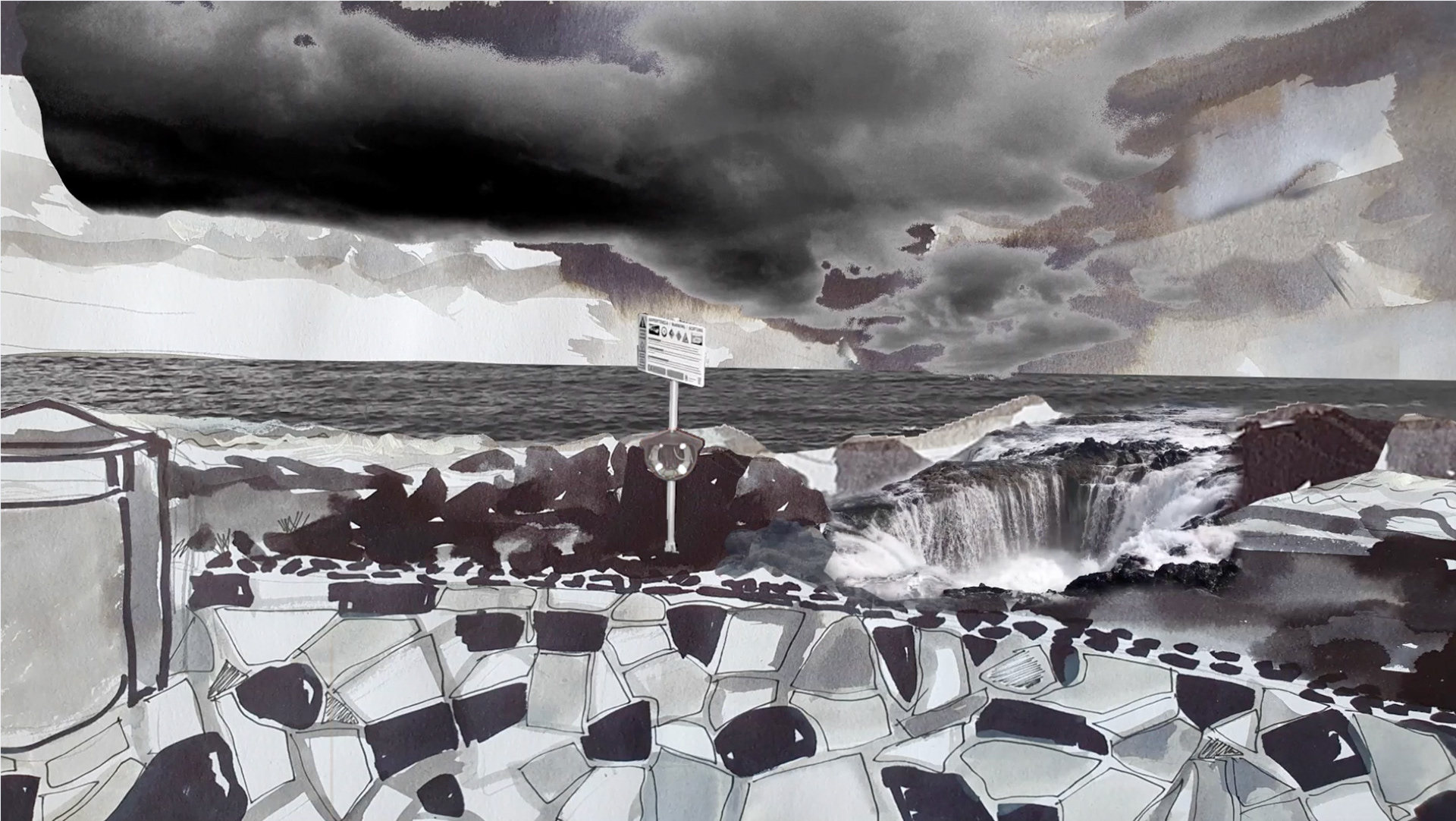 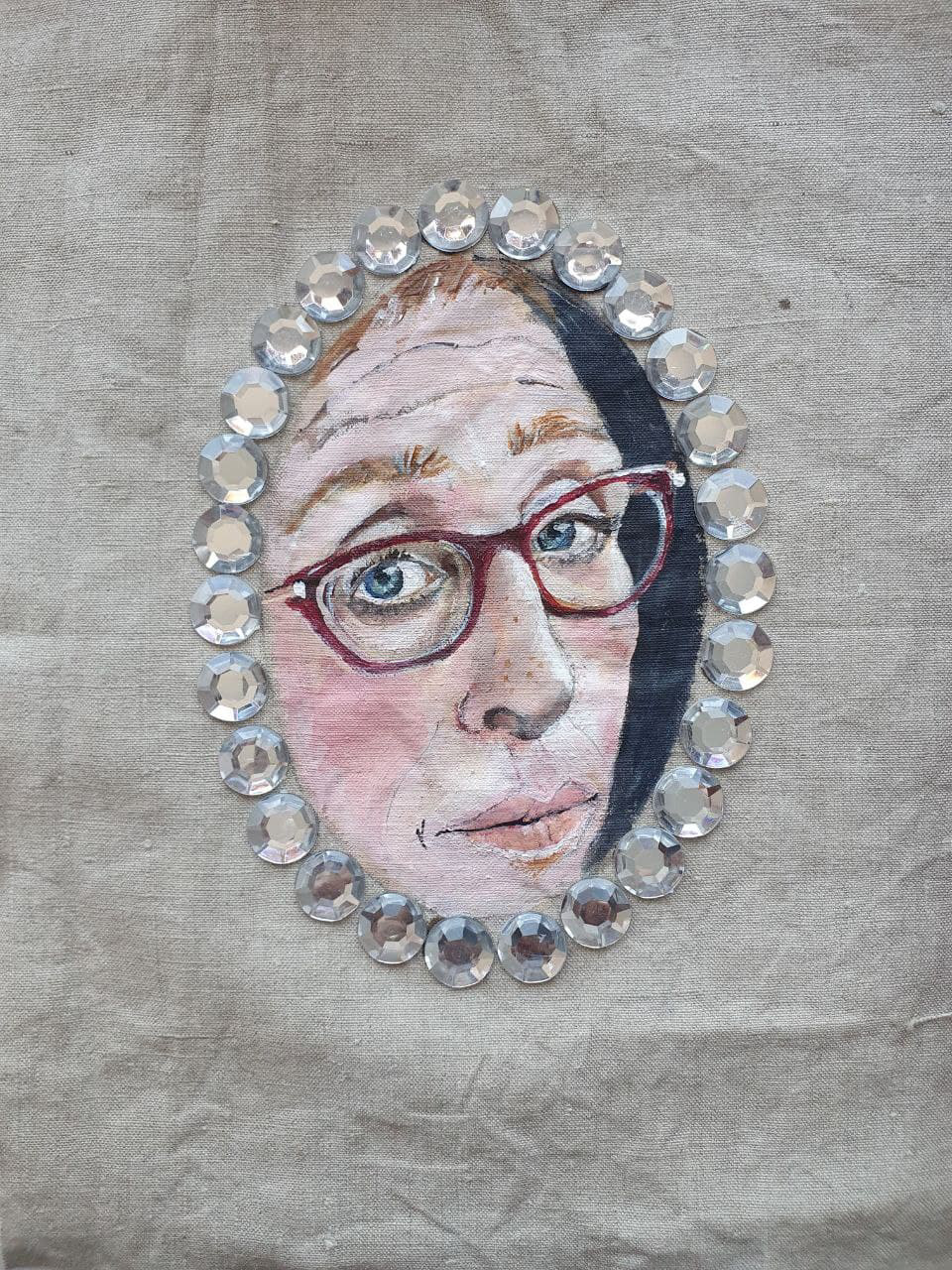 'Bufadero' an animated landscape part of the 'Elsewhere' online virtual exhibition.
'Linen Princess' a painting on linen with sound file telling the story of linen manufacture and modernisation in N Ireland. Part of the exhibition 'The Garden of Loss & Triumph' in Melbourne at the No vacancy Gallery and moving to Amsterdam in 2022.
'Admirala' part of the online 'Door to Door' exhibition where each artist was sent a page from a 1950's encyclopaedia to make a work based upon - my page was of naval attire during the 18th century. I had similar encyclopaedias when I was a child and there were no women in them so I put the record straight.